Exhibit of Sorrows is a circus-themed horror game with a few unconventional differences from your standard horror game:

1. The game is brightly lit (for the most part) and has a generally colorful atmosphere

2. There are relatively few jumpscares or explicitly terrifying scenes, and the ones that do exist are quite tame by conventional horror standards

3. There is very little in-game writing/story beyond the instructions and flavor text

And yet the game has creeped out and disturbed plenty of players.

I think one big reason is because when designing the game, we ensured that everything bad that happens in the game comes from a deliberate player action.

In the first scene of Exhibit of Sorrows, there is an air pump attached to a doll named Mr. Floaty. On top of the air pump is a button that will cause the pump to run and Mr. Floaty to inflate until he eventually gives the player a key to proceed. 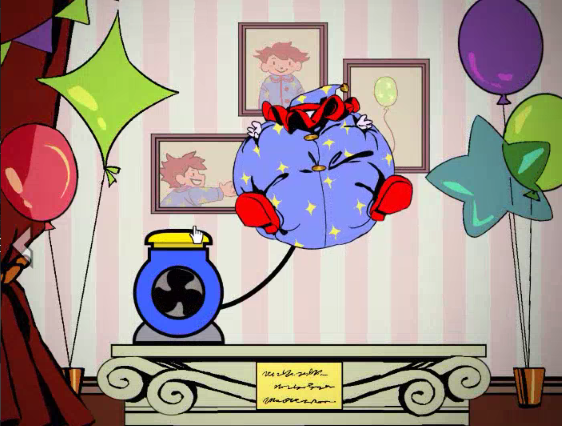 Rather than simply clicking the button once, the player needs to hold down the air pump button and watch as Mr. Floaty inflates, expands, and cries out before inevitably exploding. The scene becomes much more involved since it is not an auto-play cutscene, but something the player needs to consciously push forward until it completes.

Get Exhibit of Sorrows

Have fun with seemingly friendly dolls and a not so friendly clown.

God I love this game! It surprised me, it was comforting and colourful at first, but then as you went deeper into the game, it just slowly becomes the horror game you thought would eventually come. And I do just adore the hinted backstory, I do have so many questions! Yet I’m curious, how tall are the dolls, or the clown, if there is any set or estimated height?

I like how you made the player have to do things, and I think it adds to the point where the Jack grabs the handle away from you. If it had been a cutscene, it wouldn't have felt like one had lost control.

Thanks! Jack scene was definitely the one that breaks the earlier patterns of the player being in full control. Thought it was a suitable way to build a last scene.

Yes, it does highlight how suspiciously simple the last key is, though it was foreshadowed every other time the clown appeared.

1. The game is brightly lit (for the most part) and has a generally colorful atmosphere

2. There are relatively few jumpscares or explicitly terrifying scenes, and the ones that do exist are quite tame by conventional horror standards

3. There is very little in-game writing/story beyond the instructions and flavor text

I like all of these things! I feel like #1 is actually pretty common in the horror video game genre with games like Doki Doki Literature Club, Dreaming Mary, Jimmy and the Pulsating Mass, and Rusty Lake (sorta...), even if it's not common in conventional horror. I think it really does work in this game -- you know there's going to be horror and clowns and scary clowns are a well known concept, and part of that concept is it's a brightly lit funfair and kind of a creepy cute, so if that sounds like a good idea to you then you know what you're getting into by clicking on the game page and it's like an advertisement. But, the way this game handled the horror by making you then torture the clowns was still surprising, and really good after it puts you on edge by making you feel like you're the one in danger.

I also really liked how there was little writing or story! I think it's fascinating to be able to tell a story through visual or gameplay elements instead of words, and it really worked in this game's favor by having YOU be the one to torture the clowns. The gameplay really worked with the story very well.